US stocks rallied on Thursday, preserving their bullish momentum and climbing to a seven-week high as investors paring their bets on the Fed’s aggressive rate hikes amid the weak economic data. The US Gross Domestic Product (GDP) in Q2 showed that the economy has entered a technical recession after contracting by 0.9%. However, investors maintained their speculation that the Federal Reserve could reduce the pace of monetary tightening despite the data showing that the economy is losing momentum. Fed chairman Jerome Powell also said on Wednesday that rate hikes will slow at one point, shedding some light on the future of monetary policy. Inflation measures will likely fall amid the slowing economy, which might bring the end of the tightening cycle nearer. In the Eurozone, Germany’s inflation data flashed mixed signals as the Consumer Price Index (CPI) dropped to 7.5% year-on-year but the Harmonised Index of Consumer Prices (HICP) climbed to 8.5%.

The benchmarks, S&P 500 and Dow Jones Industrial Average both advanced on Thursday as dismal GDP data eased the expectation for aggressive rate hikes by the Fed. The S&P 500 was up 1.2% on a daily basis and the Dow Jones Industrial Average also advanced with a 1.0% gain for the day. Ten out of eleven sectors stayed in positive territory, with the Real Estate and the Utilities sectors the best performing among all groups, rising 3.70% and 3.53%, respectively. The Nasdaq 100 meanwhile climbed the least with a 0.9% gain on Thursday and the MSCI World index rose 1.3% for the day. 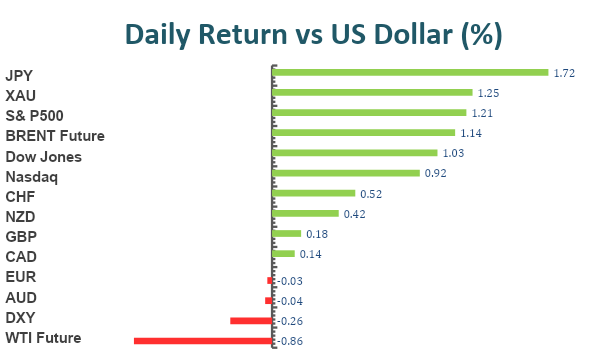 The US dollar declined on Thursday, remaining under selling pressure and retreating towards 106.1 level as the safe-haven assets performed better against the greenback yesterday. The DXY witnessed some buying and touched a daily top near the 107 mark during the European session, but then failed to preserve its upside traction and surrendered most of its daily gains. The market’s expectations of no more aggressive rate hikes from the Fed and the release of weaker US Q2 Gross Domestic Product data both exerted bearish pressure on the US dollar.

GBP/USD edged higher with a 0.18% gain on Thursday amid a weaker US dollar across the board. However, the political jitters in the UK and Brexit woes might limit the upside for Cable. The GBP/USD pair dropped to a daily low below 1.211 level in the late European session, then regained upside traction to recover most of its daily losses. Meanwhile, EUR/USD failed to overcome recent losses and remained under bearish pressure after dropping to a daily low below the 1.012 level in the European session. The pair was up almost 0.05% for the day.

Gold surged with a 1.25% gain for the day after refreshing its daily high above the $1756 mark in the late US trading session, as the slowing economy and the renewed weakness in the greenback both lend strong support to the precious metal. Meanwhile, WTI oil failed to preserve its upside traction and retreated to $97 area on Thursday.

XAUUSD gathered bullish momentum for the second straight day after the data from the US showed that the economy contracted in the second quarter. From the technical perspective, XAUUSD built on the overnight rebound above the resistance of 1748. The upward breakout gained some follow- through traction on Thursday. The four-hour outlook turned bullish as XAUUSD landed within the upper bounce of the Bollinger band and the RSI indicator is hovering within the positive territory. XAUUSD might consolidate slightly above and below 1748 as the RSI has reached the overbought condition. Stably sustaining above the level would support XAUUSD’s upside.

USDJPY fell sharply following the less hawkish Fed. From the technical perspective, USDJPY surrendered after failing to defend the crucial support level of 136.26 in the early Asian session. The intraday decline has pushed USDJPY towards the 0% Fib. Retracement of 134.34. The outlook of USDJPY has become bearish as the pair officially trades below the bullish channel. In order to reclaim its upside stance, USDJPY needs to at least climb above 136.26. On the contrary, the breakout of the immediate support of 134.34 would confirm another downside momentum toward 131.00.

USDCAD made a meaningful recovery after hitting the support level of 1.2795. The outlook of USDCAD remains bearish as the pair continues to trade below the descending trend line. In the meantime, the RSI stays in the negative territory, suggesting that buyers are on the sideline. Failure to defend the immediate level of 1.2795 would accelerate the downside. On the flip side, USDCAD needs to trade above the immediate hurdle of 1.2896 in order to claim its bullish stance.